With his surveyor’s degree in his pocket, David set off to survey the earth with his own feet. His hands embraced clay in a ceramics souvenir factory in Cape Town, South Africa. During a summer internship in the north of Scotland, he heard of a place that was constantly being mentioned by potters: La Borne. He was then to discover this mythical forest glade. Everything he needed was there: clay, wood, moisture and the humility of its inhabitants. David started producing the utilitarian ware he loves and the pot itself. Ovoid in shape, it comes in different dimensions. In 2004, corners started to appear on his pieces. The organic became more “mechanical”. The edges on these works that have been covered in slip catch the light. 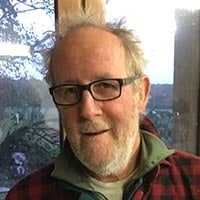