After a training in ceramics, Lucien Petit, who is originally from region around Sancerre, quickly started working on his own. After being introduced and inspired by his friend the sculptor Daniel Pontoreau, he undertook many monumental and experimental projects.

For 15 years, he was Jacqueline Lerat’s assistant, and for the past ten years, Lucien Petit has been establishing himself with his modelled ceramics, following in the footsteps of modern sculptors such as Noguchi. He moves between abstraction, architecture, simple and primitive forms. Tense, minimalist works rise up vertically: a pillar, a block, an extruded stela, a penitent. The raw stoneware clay covered in slip is fired at temperatures above 1300°C for 5 days in an anagama kiln, to produce a timeless result. 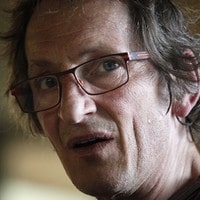