Coeur was attracted by wood-fired stoneware and came to learn ceramics from D. Garet in 1990. However, she focused her creativity on sculpting plump female bodies, which as a self-taught artist she spontaneously modelled. She boldly took on large scale work, nudity without modesty, hips swaying with a slender waist but prominent buttocks like the prehistoric mother goddesses. Isabelle celebrates the body in love and its sensual curves. She also creates small reliefs, silhouettes of generously-buttocked men or women, facing forward or backward, sitting on the edge of a frame – an open window between two spaces. She has been firing for a long time in an anagama kiln with D. Whitehead, and is continuing her wood firing. 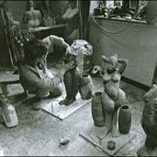