Dominique started throwing pots in Owen Watson’s workshop before joining the first session of the CNIFOP Ceramics Centre in 1979. The following year, he arrived at La Borne in his Renault 4L. For six months he worked in Bernard Thimonnier’s workshop, then he moved in with Janet Stedman and they built the 6m³ three-chamber wood firing kiln in 1982. Since1993 he  shares the workshop with Roz Herrin. Dominique, with his remarkable skill turning on the wheel, steers his output towards the garden during the winter. With small and large pots, planters, watering cans, bird feeders they fill two chambers of the kiln for spring firing. Then there’s gas-fired tableware. A generous simplicity covered with a glaze made from vine ash is an invitation to come to the table, to sit around the earth, the clay. One, two, three pot let’s go! 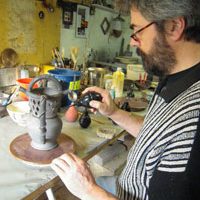